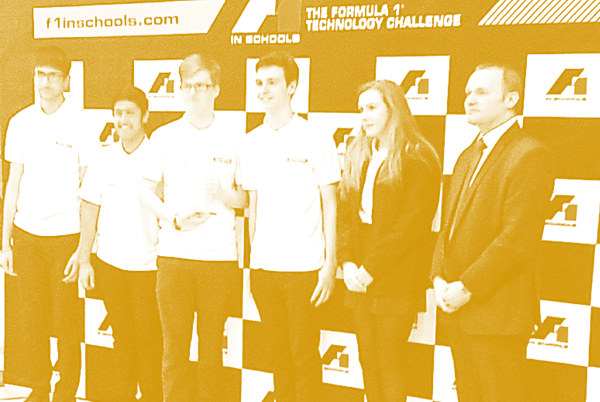 The Spidex-sponsored Atomic Force team was honoured with a Judges’ Recommendation trophy at last week’s regional finals of the global “F1 in Schools” competition. The six-strong team, from Bablake School in Warwickshire, were competing for just the second time.

Atomic Force was awarded the trophy to reflect a detailed, high-performing and innovative contribution, although the team fell just short of its declared objective, which was to secure a place in the National Finals.

“F1 in Schools” is an international STEM challenge for students aged 9 to 19 and is supported by the Formula One governing body. Participating in the contest offers young people advantageous early grounding on career paths leading to a range of disciplines within engineering and industry, including motorsport.

The competition involved designing and building a working scale model of a racing car using MDP (medium density plastic) and fitted with a propulsion system powered by compressed gas. Each car then competed in a time trial along a 25-metre course as part of a judging process that also assessed the team’s design portfolio, business plan and marketing strategy.

Speaking about the result, team communications director Julian Wreford said “Overall we finished 4th on Finals Day and unfortunately just missed out on the Nationals. We did receive a prestigious trophy however, and we’d like to thank our sponsors and school for all the support they have given us along the way.”

Spidex Managing Director Jonathan Starling said: “Atomic Force put together a very strong entry for this competition and can be extremely proud of what they have achieved. We are delighted to have played a part in what has been a challenging and very exciting project.”

Spidex has award-winning products, tried and tested implementation methods and dedicated after-sales support. We’ll support you every step of the way.